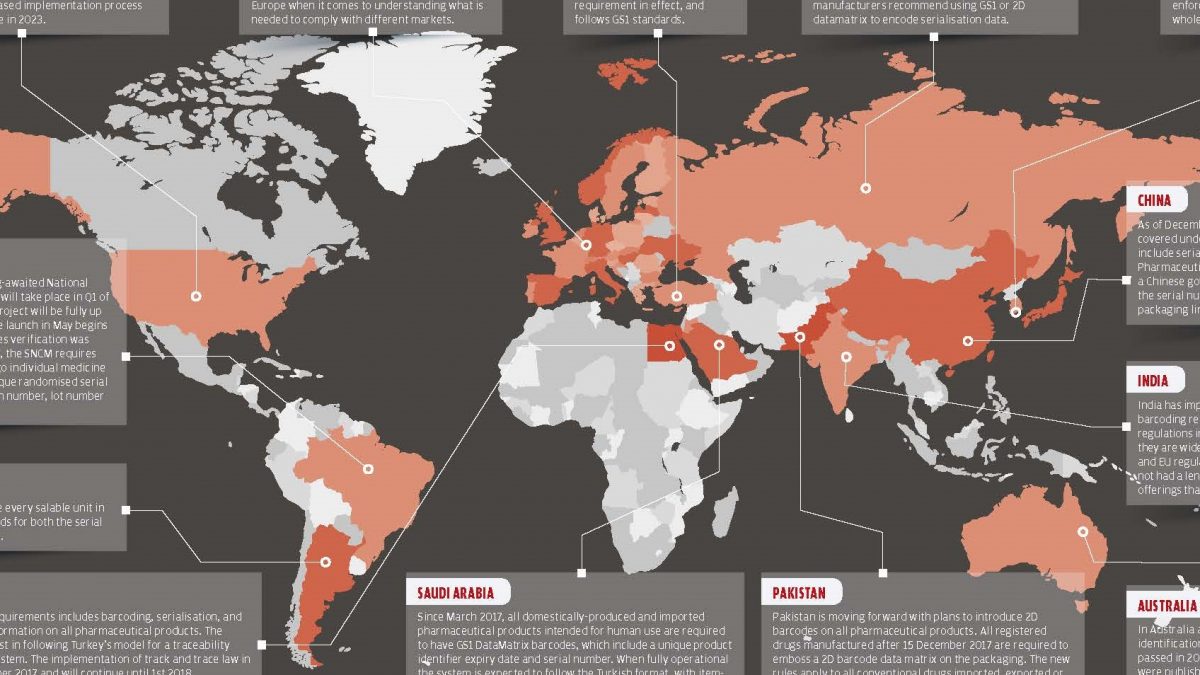 By 2020, serialization is expected to cover 80% of the global drug supply, but the regulations of different regions and increasing costs of new supply chain upgrades are making the transition process difficult and complex for the stakeholders (manufacturers, wholesalers, pharmacies etc.).

Since 2011, all drugs used in Turkey has been under surveillance with the Pharmaceutical Track & Trace System.

All the tracking and tracing for the medicines is in accordance with GS1 standards. With the Drug Tracking System, stages of the supply chain are monitored end to end and medicine safety is provided.

A serialisation programme typically takes six to nine months to implement according to the standarts fully. With this knowledge on hands, businesses hope to meet the February 2019 FMD deadline and to meet the deadline they should start their projects in Spring 2018. There is still considerable uncertainty within Europe when it comes to understanding what is needed to comply with different markets.

Since November 2017, the Drug Supply Chain Safety Act (DSCSA) requires manufacturers to label packages with a product identifier, serial number, lot number, and expiration date. An assessment made six months before the deadline shows that only 6.6 percent of medicines in the US were found to have four data members DSCSA considered necessary. The DSCSA has a phased implementation process planned to be fully implemented until 2023.

Russia is currently working towards gradual implementation. From the end of 2018, this practice and the law will apply to all medicines in circulation. The prepared law does not clearly define the standards, but industry associations and producers recommend using the GS1 standard and the 2D data matrix because they are accepted all over the world.

Since December 2015, all pharmaceutical products have been included in the serialization and reporting to the government to meet the specific requirements of China is mandatory.

Beginning March 2017, all domestic and foreign medicines produced for human use must have GS1 DataMatrix barcodes containing a unique product identifier, expiration date and serial number.
When fully integrated the system will have the Pharmaceutical Track and Trace System format used in Turkey.
Saudi Arabia’s system will also be planned and designed by TIGA Information Technologies who designed the Pharmaceutical Track and Trace System in Turkey.

In Egypt, all pharmaceutical products are subject to barcoding, serialization and state reporting to the government. Egypt follow Turkey for the model for traceability and compliance reporting system. The tracking law was implemented on 1 September 2017 and continued until 1 January 2018.

Pilot implementation for the National Drug Control System (SNCM), expected in Brazil for a long time, will take place in the first quarter of 2018. The database created for the project will be fully operational in May 2018 after 8 years of medicine validation. SNCM has introduced a 2D barcode insertion rule that includes a single randomize serial number, national registration number, lot number and expiration date into a single drug package.